Emissary of the Doomed grabs the reader from the early pages and makes compelling reading from beginning to end. The story is at once fascinating and horrifying, dramatic but remarkably little known to the public. It offers an important addition to our understanding of how the Nazi murderous campaign against the Jews unfolded, through revealing portraits of Nazis, collaborators, opportunists, and occasional good Samaritans on the one hand, and Jews forced to choose among a series of horrendous choices on the other.

—David I Kertzer, author of The Kidnapping of Edgardo Mortara and The Popes Against the Jews.

... a riveting and intense work ... a fine examination of one of the saddest episodes of the Holocaust.

Engrossing account of Joel Brand's desperate attempts to save the Hungarian Jews from Nazi extermination…. The whole sordid tale would not emerge fully until the postwar trials of Kasztner and Eichmann, and Florence does a fine, thorough job bringing the period to life.

… a compelling history of the tragic circumstances surrounding the Nazi deportation of more than 400,000 Hungarian Jews to their death in Auschwitz.

This is a deeply absorbing account, meticulously researched; a compelling, vivid portrait of Joel Brand and his urgency to make the world understand the enormity of the relentless campaign of the Nazis to eradicate the Jews of Hungary. The narrative unfolds with immmediacy and despite, of course, knowing the end of the story, I was thrust into the midst of these terrible events, and could not put this book down.

Florence’s book is an important and well-documented work of history. At the same time, however, it is an authentic page-turner that I simply could not put down … Significantly, Florence is both an historian (Blood Libel) and a novelist (The Last Season), and he describes the exploits of Joel Brand in colorful and compelling detail, thus reminding us that history is made and experienced by flesh-and-blood human beings.

At the same time, the exploits of Joel Brand serve as a kind of prism through which we can see flashes of the larger history of the Holocaust. He describes how the first eyewitness accounts of what was happening behind the electrified fences at Auschwitz reached the West, and how the so-called “Auschwitz Protocols” changed the calculus of decision-making for rescuers and war-planners alike. Oskar Schindler shows up in these pages and so do Swedish diplomat Raoul Wallenberg, who saved Jewish lives by handing out visas in Budapest, and Hannah Senesh, the poet-commando who parachuted behind enemy lines and ended up a victim of the Gestapo. … Emissary of the Doomed is ultimately a book about the moral culpability of both the Zionist leadership and the Allied high command. 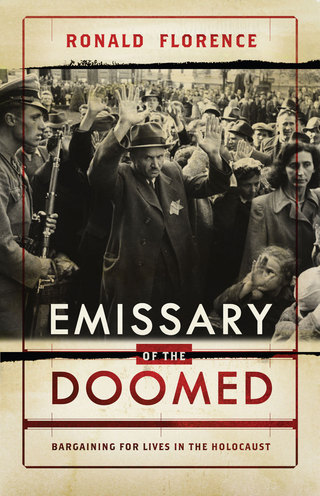