There are few more dramatic stories of 19th century Jewish history than that of the Damascus affair. Ronald Florence tells a mesmerizing tale with all the flair of a master story-teller, blending the story of what happened in Damascus— and the horrifying torture of the Jews there— with the parallel and equally compelling story of the international struggle among the world's great powers that ultimately determined the Jews' fate. The epic clash of Jews, Muslims, and Christians of over a century and a half ago, the Damascus case resonates all too painfully today. Filled with mystery and suspense, Blood Libel is an engrossing read.

—David Kertzer, author of The Popes Against the Jews and The Kidnapping of Edgardo Mortara

These days, when old, outdated anti-Semitic lies are being used in too many circles against the Jewish people, this book is important to all those who feel compelled to denounce them.

... masterfully recounts the drama of this 19th century epic clash of religions and international politics in a compelling and scholarly chronicle ... a first-rate mystery that, sadly, has echoes in the anti-Semitic rhetoric and violence witnessed in Europe and the Middle East of late. This reviewer highly recommends Blood Libel, not only as an historical monograph, but as a powerful thriller with thought-provoking insights into contemporary anti-Jewish prejudices.

... a concise and gripping narrative, told from the perspective of contemporary actors—the Jews of Damascus and of Europe, the European community in the Middle East, and politicians and statesmen in both regions, all of whom had different interests in the affair.... In Blood Libel Florence retells with verve and style a story that helps illuminate current passions and hatreds, in part because it played an important role in fomenting them.

This is great material, and Florence, a novelist (Zeppelin) and historian, handles it with dramatic flair and meticulous documentation. ... an excellent work of popular history. 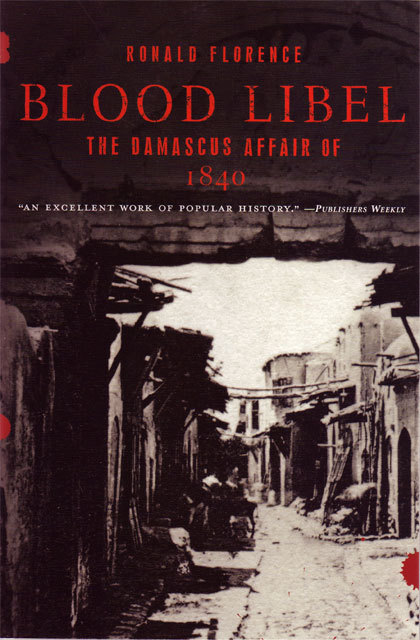 A Hebrew translation by Yossi Nagar, עלילת
דם. דמשק 1840, is available from the Israeli Antiquities Authority.